The Merry Cemetery from Sapanta Maramures

Vesel Cemetery is a cemetery in Săpânța, Maramureș County, famous for the crosses of brightly colored graves and naive paintings representing scenes from the life and occupation of the buried.

On some crosses there are even verses in which the respective people are mentioned, often with humorous nuances.

Stan Ioan Pătraș was born in 1908, in the commune of Săpânța in Maramureș County. Pătraș was attracted from a young age by wood carving, painting and poetry, made according to the canons of popular creation. He started carving oak crosses at the age of 14. Until 1977, Pătraș made about 700 crosses on both cemeteries in Săpânța, known as the “Merry Cemetery”. Stan Ioan Pătraș was a complex folk craftsman, making a series of artistically worked objects: hangers, corners, chairs, cabinets, blinds, spoons and monumental works, such as crosses and gates. He also decorated his own house with brightly colored wooden sculptures. He died in 1977. His successor, Dumitru Pop, chose to live in his master’s house, which he maintains as a workshop and museum.

Săpânța Peri Monastery was founded in 1997, on the border of Săpânța village, out of the desire to renew the historical tradition of the old St. Archangel Michael Monastery, in Peri, Maramureș, today on the territory of Ukraine. Founded by the parish priest Grigore Lutai, according to the plans of the architect Dorel Cordoș, the Săpânța Peri Monastery received, since 2005, a community of nuns, who continued the construction works previously started. The construction is located on the banks of the Tisza and was built between 1998 and 2003. The tower of the monastery is visible from a distance of five kilometers over the Tisza and can be admired by Romanians from Transcarpathia, a region of historic Maramures remaining in Ukraine. With a maximum height of 78 m, the church of the Săpânța-Peri monastery is currently ranked 3rd among the places of worship in Romania. 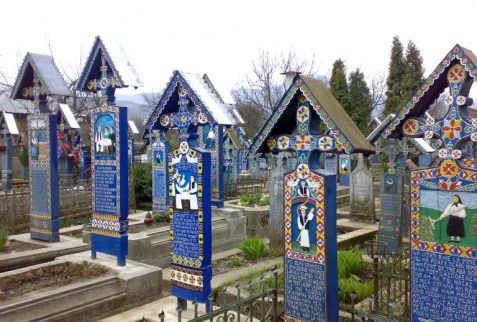 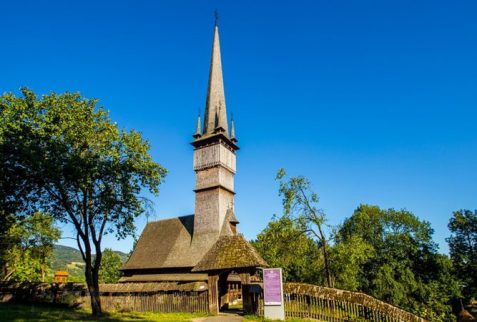 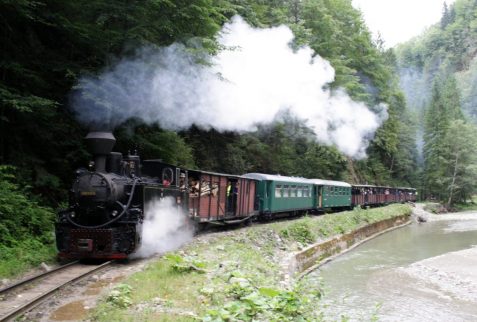 The project of the Monastery “Soborul Sfintilor 12 Apostoli” – Barsana was conceived as an architectural ensemble, developed by the architect Dorel Cordos, which will develop in time and space depending on the financial possibilities of the locals, sponsors and the spiritual needs of the monastic community. The project includes the following objectives: Maramures style church, Summer Altar, Aghiasmatarul, Abbess, Voivodeship House, Mothers’ House, Artist’s House, Clergyman’s House, Archbishop, Feast of the Trapeze, Gavril de Barsana Museum of Icons and Old Book, Tower, Maramures Gate, Funerary Monument, access road, place for lighting candles, crosses, lake, bridge over the lake, alleys leading to various objectives, parking and more.

The Maramureș Village Museum is a tourist attraction located in the town of Sighetu Marmației, Maramureș County, opened in 1981, which mainly groups a collection of houses specific to the Maramureș area. The museum comprises over 30 households, some fully furnished with original pieces. The preserved houses and households are grouped on the main subzones of the historical Maramureș: Cosău-Mara and Iza Inferioara up to Strâmtura, Iza Mijlocie, Vişeu-Borșa, Tisa subzone and Ruscova basin. In addition to the Romanian households, a Ukrainian house, a Hungarian house and two Jewish houses were rebuilt (a village synagogue was arranged inside one).

It was conceived and initiated in 1992 by the then president of the Civic Alliance, Ana Blandiana, and realized in the next decade together with Romulus Rusan and a prestigious team of historians, architects, builders and designers. In 1998, the Council of Europe placed the Sighet Memorial among the main sites for preserving the continent’s memory, alongside the Auschwitz Memorial and the Normandy Peace Memorial.

The spa resort Ocna Şugatag is located in Maramureş County, at a distance of 10 km from Vadul Izei, on a hill that separates Valea Marei from Valea Cosaului, at an altitude of 490m, in the Maramureş Depression. It is a station with permanent operation. One hundred years ago, when the salt mines collapsed, an eye of salt and warm water appeared, and today Ocna Şugatag is a balneo-climatic resort where healing treatment is done, it has developed leisure and tourist activities specific to the area.